Jan. 11 saw Stack’s Bowers offer the first tranche of the remarkable Eldorado Collection of the Paper Money of Colombia.

The sale was part of 10 catalogs of coins and notes offered by the company during NYINC. All told, the 605 lots of paper money took $1,133,766. The average price of $1,874 apiece testified to the outstanding quality of the collection.

Top-selling lot was a low serial number July 20, 1923, gold note series set of four, 1 to 10 pesos (P-361 to -364a). All carried serial number 0000003. All were graded about PMG Choice Uncirculated 63. The auction catalog rightly described the set as a “museum caliber quartet and trophy for low-number note collectors.” The upshot saw the bidding rapidly soar into the stratosphere to realize almost 17 times the upper estimate, or $84,000. 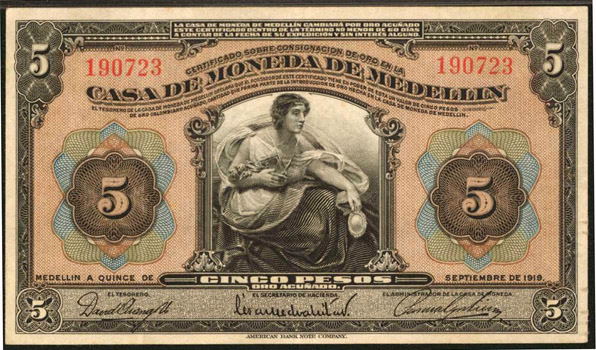 Remarkably, an official ABNC archival record book of issues of República de la Colombia, 1923-1979, managed just $7,800. It had previously sold as Lot 87 of the 1990 ABN Sale at Christies. It had remained intact.

Full catalog details and prices realized are available at the Stack’s Bowers website, www.stacksbowers.com, including the results of a 98-lot, internet-only sale also from the Eldorado Collection.